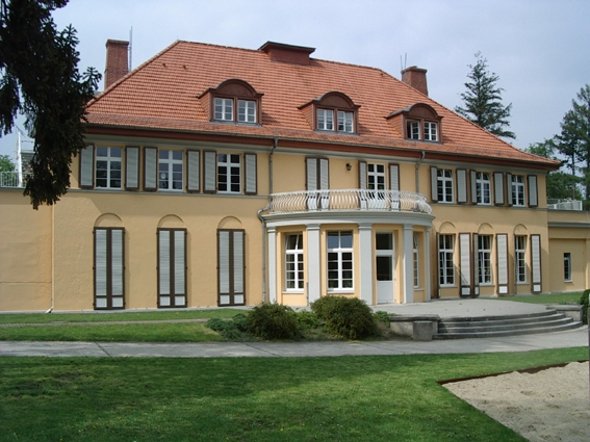 The area around the Spreti Villa on the road am Amselsteg is closely linked with the heyday of flats racing in Hoppegarten and Neuenhagen in the early 20th century. Starting in 1913, the brothers Arthur and Carl von Weinberg from Frankfurt began building the racing stable for the Waldfried stud farm. In addition to stables, they erected a covered riding track, as well as three residences for trainers, grooms, and jockeys. Then in 1924, Count Rudolf von Spreti, Arthur von Weinberg’s son-in-law, had a villa built on the grounds. He had taken charge of the racing stables in 1919. He was a well-known and influential patron of horse racing. Colloquially, the manor house was called either the Spreti Villa or the Festa Villa in honor of the stable’s most famous brood mare. The manor house has survived in its original form. It served as a tuberculosis hospital starting in 1951, before becoming a residential home for developmentally disabled children. Since 1990, the Spreti Villa has housed the special needs school Am Amselsteg for children with cognitive disabilities. The racing stable remained in operation until 1993. After the horse barns were torn down, a new residential neighborhood grew up bit by bit. The streets are named for well-known people or racing stables on the German horse racing scene.