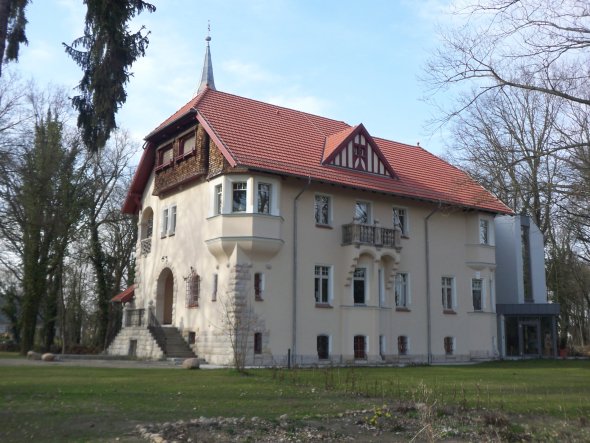 In 1900, former estate owner and town official George Leopold Dotti had a new home and administration building built on what was then the Königsallee (now Hauptstrasse). With the grand main boulevard in the park, the stairs leading to the main entrance, the small, vaulted entrance hall, and the curved staircase running up two floors, it is reminiscent of the Dotti Palace.

The householder also installed a large park with a pond, an artificial hill, and an avenue of linden trees surrounding his new home. At the entrance to the estate, Dotti built a smaller, half-timbered building, which housed offices for municipal officials, stables, and a garage for his automobile. Dotti’s daughter, Johanna, spent a carefree childhood there. During the Nazi era, as the wife of German diplomat Dr. Wilhelm Solf, she became an active member of the resistance. The Solf Circle encompassed a group of intellectuals who offered practical help to Jews to escape the Nazi system of annihilation. After the Solf Circle was betrayed, Hanna Solf was sent to Ravensbrück concentration camp, but she survived. There is a memorial plaque for her on the villa, her childhood home.

After World War I, the entire estate was owned by Berlin circus director Albert Schumann, and it is his name that has remained the informal designation for the building. In 1941, it was bought by the Czech shoe company Bata. After World War II, it served various functions for the town. The villa housed, among other things, the local troop of the Free German Youth, East Germany’s state youth organization, and the public health office. The smaller building was used by various public authorities, including the police registry. Beginning in 1950, it was a special needs school, and then both buildings were used for a kindergarten and an after-school club. Since 2002, the former outbuilding has been home to the Haus der Senioren senior center, offering a range of activities for the older generation. The town undertook an extensive refurbishment of the villa itself and re-opened it in 2009 as the Haus der Begegnungen und des Lernens community center.