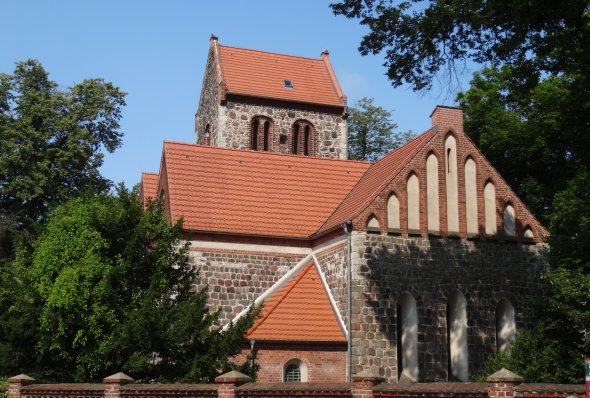 The 13th century fieldstone church on Neuenhagen’s former village green stands as a stone testament to the origins of our town. The walls of the early Gothic church are 1.25 meters thick, while the walls of the tower are as thick as 1.6 meters.  So the church provided a safe haven for village residents in times of war. Three windows in the eastern gable that look almost like embrasures survive from that era. It was not until much later that the tower portal and the large arched window on the north side were inserted into the walls and the tower built up to the height it now has. In 1889, a south wing with three gables was added to the church, the nave walls were raised by 1.5 meters, and the interior was refurbished. The 14th century Ave Maria bell in the tower is one of the oldest in Brandenburg and is particularly valuable. Its two smaller sisters – the Agnus Dei and Laudate Dominum bells were melted down for military matériel in World War I, and their successors suffered the same fate in World War II. It was not until 2005, after a fund-raising campaign by the non-profit Musikpodium Neuenhagen Hoppegarten association that new bells were cast and hung in the bell tower.