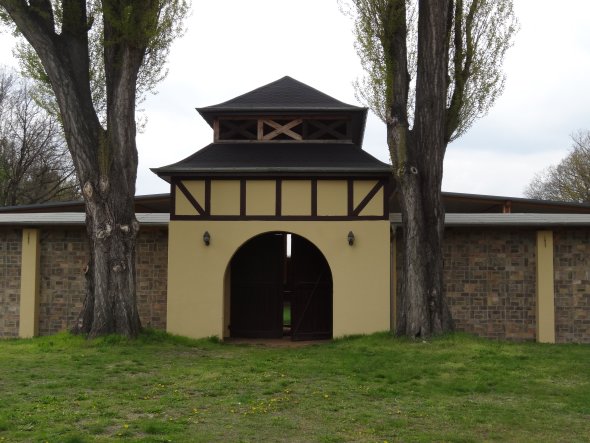 Graditz horse farm was one of the three best known of the more than 20 racing stables that once graced Neuenhagen. Erich Feigell, a pensioner from Berlin, had a two-story villa and farm building built here in 1891, along with gardens and a stable with an adjacent farmyard. The Prussian state acquired the property in 1907/08 to train horses from the royal stud farm at Graditz. By 1935, the Graditz racing stable had been expanded by four additional stable buildings, a covered riding track, a building to house the trainee stable hands, and a foaling and sick pen. Abutting the property is the Idea training track, which was set up in 1885 by the owner Oscar Oehlschläger from Hoppegarten. For many years, Graditz was one of the most successful racing stables in Germany. It had 51 stalls. On February 5, 1945, the Graditz stable was evacuated and the horses were moved to Lower Saxony. After its new beginning in 1951 as an East German state-owned racing stable – later the site of three stables, Graditz, Görlsdorf, and Bastei – the horses raised here would race on the many tracks in East Germany. The ensemble has been under an historical preservation order since the 1980s.

After the unification of East and West Germany, the Treuhand agency tasked with privatizing former East German enterprises sold Graditz Farm and the adjoining Idea track and it is now in private hands.