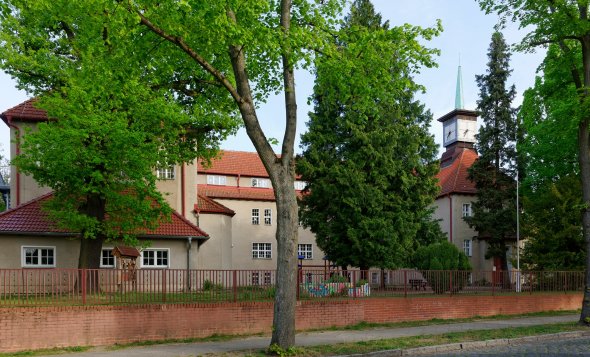 On September 11, 1911, the municipal council passed a resolution to build a “new” school. Teacher Paul Miersch was actively involved in planning construction of the new school building, and went on to be its headmaster for 25 years. He wanted Neuenhagen to have a modern schoolhouse that did not look “like a barracks.” He laid out the following specifications, which were followed almost to the letter. “The schoolhouse … should not be located too close to the street, and should not be surrounded by a tall iron fence. The front garden must be planted with groups of trees, alternating with lawns. The sloped schoolyard should be separated into two sections by trees, the upper section should be set up as an athletics and playing field. The selection of shrubs and trees should be made with the intent of using them for the teaching of natural history.” After 18 months of construction, the new school opened for its designated purpose on September 26, 1913. It was an elegant building with generous classrooms, a gym, an auditorium, broad corridors with water fountains, and even a clock tower with a hooded roof. That rather staid detail, however, later turned out to be not to the liking of Nazi leaders, so when the roof was redone in 1935/36, a spire was added to the school. In honor of the 200th anniversary of Johann Wolfgang von Goethe’s birth, the “new school” was christened the Goethe School on July 28, 1949, the name it still bears.