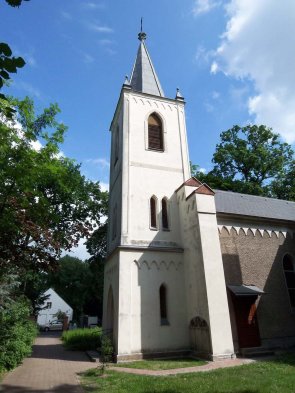 The first church in the southern part of Neuenhagen, in Bollensdorf, was a rectangular, single nave construction, with no chancel or tower, built on the village green in the 13th century. In 1854, a merchant from Berlin named Karl Eduard Kelch took over Bollensdorf manor and the patronage of the church. Beginning in 1856, he had the church rebuilt – turning it into the neo-Gothic building you see today, with a single aisle and a five-sided apse. His wife donated the organ in 1870 and it is also still in use. The two wooden panels leading to the pulpit date to 1621, and the intricately decorated chalice from 1651 are from the original church. The Kelch family erected a mausoleum in the churchyard more than 100 years ago as a family burial place. That red brick building with its imposing portal today houses a small gallery presenting the history of Bollensdorf. It is open to visitors every Thursday from 10 to 12.