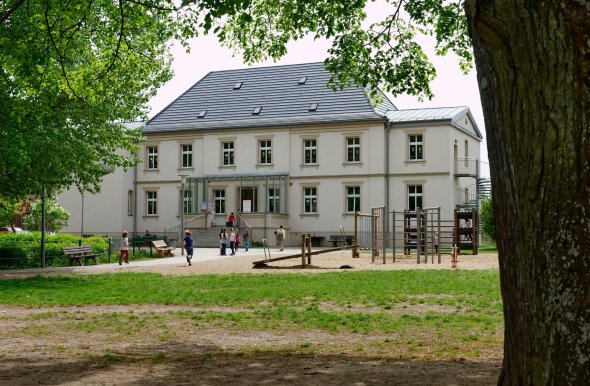 These days the Bollensdorf Manor House once again looks like the early Baroque stately home built around 1700 by estate owner Hans Ludwig von Görtzke, whose family had been here since the middle of the 15th century. Between 1854 and 1912, the building was extensively refurbished inside and out by the Kelchs, a merchant family from Berlin, who built it into a villa with a tower on the east side, although that detail was not rebuilt during restoration after being damaged in World War II. Investigations into the building’s history during a complete overhaul in 2009/2010 established that the roof truss was put up between 1678 and 1690; it remains largely intact and is well worth seeing. Excavations of the vaulted cellars uncovered the remains of a castle yard moat and fill from a rise, stemming from the 13th century. This is evidence that perhaps a residential castle once stood on the knoll where the manor house now stands. Visitors can call the Protestant church parish history group for an appointment to see seven of the historical, partially excavated vaulted cellars. The building today is called Haus der Begegnungen Bollensdorf and is used as a day care center for children.